A few weeks ago, fellow writer Scott Lambridis asked me to join him in a global "Blog Hop." I had no idea what that was, but nonetheless, here are the results:

What am I working on?
I've been working on a new work of writing based upon the genre of non-fiction that includes the malcolm gladwells and freakanomic types. Essentially, it pokes fun at the concept of storytelling bookended by raw data, that seems to be very in vogue. That's very different than En Vogue, and yet equally essential to American culture. That project is about 12% finished. My other big writing project involves going through about two thousand pages of fiction that I've written and distilling out a few of my favorite pieces for a new book of short stories. I would say it's an 'old' book of stories, but packaged anew and edited, so it's writing the same way Kanye West makes music, more or less. The goal of this book, besides to align myself with Kanye West, is to make my writing accessible and also so that I can recommend something. I don't feel like recommending any of my old books, mostly because they feel old to me, although every once in a while I get an email from somebody who just discovered them for the first time, which is kind of great to get feedback. It surprises me, in a way, because I don't feel very possessive of my work. In essence, I feel like more of a conduit, or necromancer, and the word slinging feels like it has nothing to do with me, but I really enjoy the lightning.

How is my work different than others in its genre?
I use the word 'bulbous' a lot more than the other fiction writers of my generation. Also, I tend to emphasis the height of things a bit more than the weight. I would say that more than anything, I have a distinct voice, which mostly says the phrase: "I would like to watch Jaws-3 in 3D" but is distinct in its pitch and tone. I really enjoy writing and writers and reading and readers, so this sets me apart from the other word-hating misanthropes who clack keys.

Why do I write what I do?
I have not idea. I feel like that's like asking a pianist why they are playing the music they are playing when they're messing around. The words just kind of spin out of my keyboard pressing, and I get into a kind of trance where it's like I'm listening to music, if that makes sense. I think it's like runners or painters or maybe somebody commuting in traffic and just thinking to himself and suddenly ten minutes have passed. It's a very present process, which sounds like I just made it up, which I did. I guess I just love the way the cursor moves from left to right, leaving a string of words in its wake. I enjoy the feeling of action while seated, on some level, although I also like locomotion as well, and somewhere in that paradox I have things like a cat who decides to be a stockbroker for four years and then gets fed up with the size of the cubicles, which is an idea I never had until just now, that I have to deal with. Either I can write a story about it, or I can ignore it. If I'm in front of my computers, I usually do the former.

How does my writing process work?
Oops, I think I already answered this, but here it is again: I put myself in front of my computer and then when I get tired of writing I stop. I should say that I spent 20 years doing this every day for at least a few sentences. I had a rule: write something. People ask me: how do you become a writer? That's simple: you write. Everything else is bullshit. There's inaction and inertia and there's generative action. If you seek to become that which you believe you are, the only way to test that journey, is to do it. For "real" writers, there is no choice involved. Writers who do not write are miserable. So if you are a writer, or are curious if you might be one, write. If you don't, your soul will atrophy and there's a very good chance that you will end up dead in a ditch covered with chewing tobacco.

That's that: but here's an introduction of my fellow blog hoppers:

Mr. Bunch maintains an active career as a violist, and is widely recognized for performing his own groundbreaking works for viola. A versatile musician with a deep interest in American musical traditions and improvisation, he plays bluegrass fiddle, sings, and is a frequent guest performer, recording artist, and arranger with many prominent rock, jazz, folk, and experimental artists. A native of Portland, Oregon, Mr. Bunch graduated from the Juilliard School with degrees in both viola and composition, and currently lives in Brooklyn, NY. For more information, please visit www.kenjibunch.com. 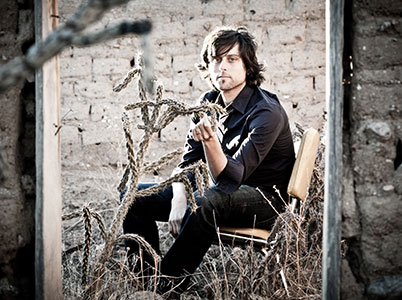 David Berkeley is a songwriter and author based in Santa Fe, NM. He's appeared on This American Life and tours all over the world. He's released five studio albums and one memoir. The San Francisco Chronicle calls him "a musical poet." His new project is his most ambitious yet, a novella of ten intertwining short stories and an album of ten accompanying songs. You can visit him at www.davidberkeley.com or see his musings on fatherhood, music and the sky at 100skies.com. 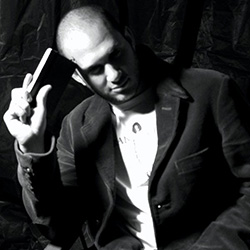 Scott Lambridis' debut novel, THE MANY RAYMOND DAYS, received the 2012 Dana Award. The novel, about a scientist who discovers the end of time, is seeking publication. Stories of his have appeared or are forthcoming in Slice, Painted Bride, Cafe Irreal, Flash Fiction Funny, New American Writing, and other journals. He recently completed his MFA from San Francisco State where he received the Miriam Ylvisaker Fellowship and three literary awards. Before that, he earned a degree in neurobiology, and co-founded Omnibucket.com through which he co-hosts the Action Fiction! performance series. More at scottlambridis.com. 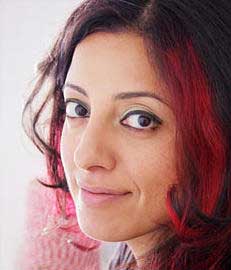 Denmo holds an MFA in Actor-Created Physical Theatre from Naropa University and a BFA in Acting from Boston University. She has performed for A.C.T, Aurora Theatre, Huntington Theatre, and the Vineyard Playhouse to name a few. Denmo has been nominated for an Irene Ryan Acting Award and a Joseph Jefferson Award for "Best Actress in a Lead Role". As a playwright, she was the winner of the 2011 Highlight Series produced by Noor Theatre and New York Theatre Workshop and was selected as an Honoree for the Middle East Initiative Award. She is a founding Artistic Director of Mugwumpin, an award-winning performance group based in San Francisco. To date, Denmo has co-created seven ensemble based performances and written two full-length plays. Her plays include ECSTASY I a water fable -- a two-year Theatre Bay Area commission produced by Golden Thread, and BABA, a riveting solo performance exploring Middle Eastern identity that workshopped throughout the U.S to sold-out houses, including a one-night engagement at AlterTheater (under the title FUNNY, a trunk show). Denmo is the founder and CEO of Earthbody, an organic day spa for healing -- voted Best Day Spa by SF Weekly and CitySearch. She also formulates an organic bodycare line inspired by the principles of Ayurveda. In addition to running a successful business, Denmo is an educator, therapist, writer and Holistic Coach. She is personally committed to acts of love, the power of art, and the wisdom of transformation.
http://www.adenmoproject.com/adp/projects.html